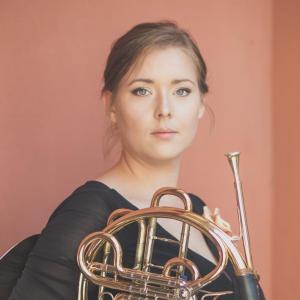 Paulina is a wonderful friend and respected hornist. Already during her studies in the Ignacy Jan Paderewski Academy of Music (which she graduated 2014) she was well known for her musical reliability and confidence.

Her professionalism and efforts to pursue her goals resulted in many achievements to be proud of. The years 2011-2013 are a period of her life marked with music competitions. And every single one of them she was recognized and honored. (I am only going to mention being awarded on VIII Międzynarodowy Konkurs Instrumentów Dętych „Etiuda” in 2011, making it to the final of III Ogólnopolskim Konkursie Waltornistów im. Edwina Golnika in Łódź w 2012, or the finals of III Ogólnopolski Konkurs Instrumentów Dętych Blaszanych in Katowice in 2013)

Her dedication and hard work bears fruit of professional success. Since 2014 she is employed as a horn teacher in the Academy of Music in Poznan. A year before that she successfully passed the exam and was hired as a soloist musician in the Opera house in Poznan. But she doesn’t limit herself by these two institutions, being frequently invited to take part in other projects. 2011-2015 she cooperated with I, Culture Orchestra (which was an international musical initiative of Adam Mickiewicz Institute in Warsaw, as part of polish presidency in the European Union; the orchestra was conducted by Sir Neville Marriner, Paweł Kotla, Ilyich Rivas, Kilill Karabits), since 2011 she is also a member of the CoOperate Orchestra. Paulina supports also Sinfonietta Polonia and Chamber Orchestra l’Autunno for many years already.

Paulina’s reaction to our offer to cooperate in MASTERBRASS was enthusiastic, and now she enriches us with her priceless wonderful sound, many musical ideas, professionalism and youthful verve. With her lovely smile, she is able to break the tension even in the hardest situations. We cannot imagine our quintet without Paulina.