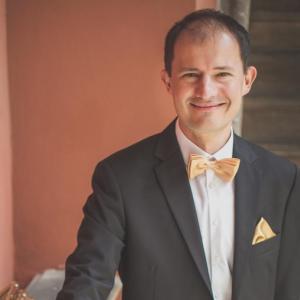 In 2001 and 2002 he was an assistant in prof. Michael Parkinson’s (Webster University) trumpet and trombone class during International Summer Jazz Academy in Cracow.

Since 2003 he played bass trombone in trombone octet in Hannover. In 2006, said ensemble has won the first prize in Emory Remington Trombone Choir Competition, that is being organized by the International Trombone Association (ITA).

Since 2004 he teaches trombone in I.J. Paderewski Academy of Music in Poznan, he is also a juror in musical competitions, and an expert for CEA (Artistic Education Centre). His students are being noticed and awarded in nationwide and international trombone competitions.

2012 Maciej Łakomy was awarded by Polskie Towarzystwo Muzyki Współczesnej (Polish Contemporary Music Association), for his work on popularization of contemporary music in his didactic work.

In 2015 he was awarded by the President of the Republic of Poland Andrzej Duda a Bronze Medal for the Long-Term Service for exemplary, exceptionally conscientious performance of duties resulting from his professional work in the service of the State.

Playing in the band Masterbrass is for him a natural continuation of his great passion for chamber music, which he developed during his studies in Germany.