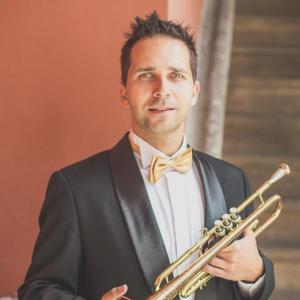 In 2004 he graduated with honors from the Ignacy Jan Paderewski Academy of Music in Poznan in the class of prof. Roman Gryn, and in 2007 finished his postgraduate studies in playing baroque trumpet - with prof. Johann Plietzsch as a teacher. To develop his skills as a performer and a teacher, he took part in numerous master classes run by such acknowledged pedagogues as for example: prof. Markus Würsch (Switzerland), prof. James Thompson (USA), prof. Johann Plietzsch (Germany), prof. Igor Cecocho, prof. Gabriele Cassone (Italy), prof. Gabor Boldoczki (Hungary), prof. Manfred Bockschweiger (Germany), prof. Jan Broda (Czech Republic), prof. Adomas Kontautas (Lithuania), prof. Aki Valimaki (Finland). Since January 2007 Andrzej is employed as first trumpeter of Teatr Muzyczny in Poznan (Operetta). He also leads a class of young trumpeters in Poznańska Ogólnokształcąca Szkola Muzyczna - a music school in Poznan. Thanks to his pedagogical practice and innovative methods, his pupils are being successful on many polish contests.

Andrzej also leads a vibrant concert life, taking part, as a soloist and chamber musician, in plentiful musical festivals such as Festival of Music in Grossräschen, Pałucka Wiosna Muzyczna, Muzyczne Lato in Palace in Otwock, or Organ Festival of St. Anna in Warsaw, to name just a few. He performed in many prestigious places such as many castles and palaces in Poland, buildings of European and polish Parliament, presenting polish and foreign music. He is not afraid of interesting projects or long journeys. He took a three-weeks-tour through the biggest cities of China twice, he also played in a concert with well-known Placido Domingo (a concert to celebrate John Paul II’s canonization), as well as a festive concert with Teatr Muzyczny of Poznan in the Enea Stadium, for an audience of over 35 thousand people (performing the musical “Jesus Christ Superstar”). His great passion for music had a big influence on founding the band MASTERBRASS.

He has lots of musical ideas, which he consequently fulfills. There’s no such word as “impossible” in his dictionary. As a founder of a brass quintet he took the role of “the emcee” of our concerts. With his positive radiance and sense of humor, it is a pleasure to work with in his team.